What are some great ways to learn slang? Our blog is a great starting point. Every week we publish new lists of slang and idioms that will help you grow your English vocabulary. The key to learning slang (or improving vocabulary) is to not memorize long, boring lists but to learn slang naturally through immersion techniques. 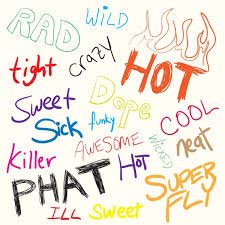 We had an awesome time in California


As soon as I collect enough money, I’m going to buy a beemer


If I had to spend anymore time in the statistics class, I will go bonkers.


The police knew Peter’s story was full of crap.


Most guys found Lisa to be a bit dorky.


The accident was just a fender bender and no one was hurt.


The hotel’s staff was famous for their flaky behaviors so no one knew what to expect.


The tickets to the baseball game was a freebie. My boss gave them to me.

Free; something that did not cost money.


The TOEFL speaking section is causing me to go bananas. I don’t know how to study for it.


Craig was just goofing way with his friends but the police suspected they were drunk.


He is making over a grand a sale.


Food portions in America are humongous.


Sid’s pad in the city was a favorite hangout for everyone in the group.