Idioms and slang are probably the most complicated elements of the English language for ESL students. English idioms rely on understanding double meanings and implied meanings of words so incorporating these into one’s speech is guaranteed to expand one’s vocabulary and general understanding of the English language. Additionally, there are times when the best way to explain something is to use an idiom.The ability to use idioms help you speak English like a native speaker.

There are many idioms in English but the 10 below are great for intermediate and advanced ESL students. If you already have an English vocabulary of about 500 words and know some basic grammar, it is time for you to start expanding you knowledge of English in areas like Slang and idioms. This list is a great starting point. 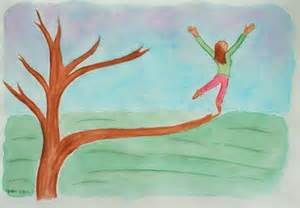 To talk about private matters in public, or with those who are not involved with the situation. For example, You shouldn’t tell the group about Dad’s problems because you don’t air your dirty laundry.

To take the positive attention away from someone else, sometimes for personal gain. For example, Jane announced her pregnancy at Lucy’s wedding; Lucy was upset that Jane stole her thunder.

Cut to the chase:

To get to the point / be clear when explaining something. For example, The police officer said “I’m going to cut to the chase, what you did was illegal.

To be completely in love. For example, Tim and Jane were head over heels and were married only one month after meeting each other.

Saved by the bell:

When a difficult or awkward situation is interrupted by a something or someone. Alludes to a struggling boxer being “saved” when the bell is rung to end the round. For example, I was about to start unpacking all the boxes but I was saved by the bell because my aunt visited.

Do everything possible to achieve a desired outcome, usually when looking for something. For example, Penny left no stone unturned in the search for her missing wedding ring.

A dime a dozen:

Something that is very cheap. For example, plastic bags are a dime a dozen.

An arm and a leg:

A very high price / cost. For example, Our cabin on the cruise ship had an amazing view but it did cost an arm and a leg.

An axe to grind:

Something to complain about; can be long standing and similar to holding a grudge. For example, Aunty Mary and Uncle John argued for hours about who should wash the dishes; they had an axe to grind.

Go out on a limb:

Extend yourself or go against common opinions. For example, John knew that his friends would think poorly of him for supporting the new tax on petrol but he went out on a limb and did so anyway.

The use of idioms will show that you are an advanced English speaker and will add depth to you communication. Correctly using idioms will expand your vocabulary as you develop a deeper understanding of the alternative and inferred meanings of many English words.

Looking to take your English to the next level? Want to be really fluent in English? Get out of your comfort zone and starting practicing with real native English teachers today